I have a new enemy and he lives next door.

I first spotted him when dad went round to the neighbours to discuss onions. He and Tim, our neighbour, wandered down the garden to his vegetable patch, and that's when I saw him.

He was lurking under a tree, looking suspicious. I knew instantly that he was up to no good. So I rushed over and started barking at him for all I was worth. But it had no effect at all. He just sat there, all calm and serene, with that stony stare on his face.

So I barked and barked some more, but he remains calm, impassive and serene. I don't like it. What do you think? He's got a nasty look about him, hasn't he? 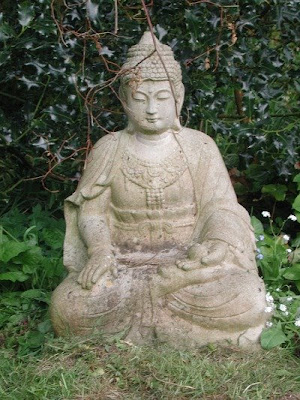 The next day Tim opened the gate and I shot through and rushed over to check if he was still there. And he was sitting in the same place, the same calm, impassive expression. So I barked and barked - but nothing.

I can sense he's there through the fence. I bark at him from our garden now and then just to let him know I'm keeping an eye on him.

What do you think I should do?
Posted by Mojo, Digger and family at 18:04