My usual walk up the canal towpath just gets better and better. Yes, I still park my butt and refuse to move. But now that I'm being let off the lead, the humans think it's necessary to practice recall. This means that they yell come and I turn up for treats. Naturally I park my butt a lot more now because I like treats. As long as I keep giving the impression I might just run all the way back to the road I should be able to keep those treats coming. 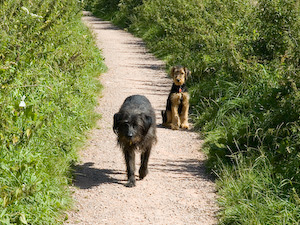 My friend in the photo is Rooster, a long-time friend of the family who stays whenever his family are on holiday. I've heard he used to be a whole lot of fun, but now he is old, smelly, deaf, and slow. My mum and dad adore him though, so I try not to call him smelly to his face. He deserves a post of his own which I'll write soon.

I am such a wuss when it comes to water. I don't care if Airedales are supposed to love water. I don't! I managed a silly five minutes where I almost got in the canal (and my mum nearly pushed me in for fun) then ran around like an idiot. I only stopped spronking around to run up to the partially-sighted man being led up the canal and tried to knock his walking stick out of his hands. 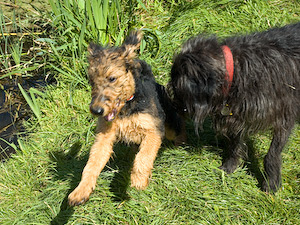 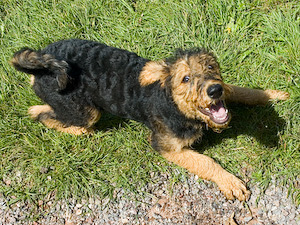 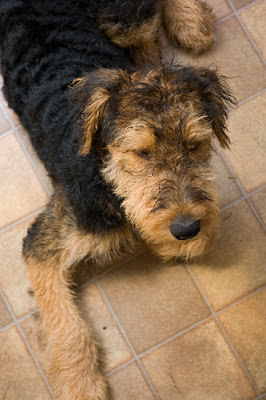 Labels: down the towpath, idiocy, rooster