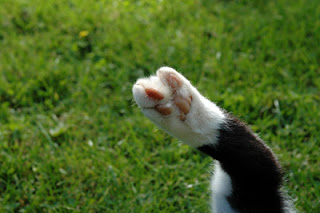 It's never a good sign when the cat puts it's hand up. It can only spell trouble.

It has been (ouch) brought to my attention (ow, stop that) that my blog is missing something. Two things in fact.

Until now I have been loathe to mention them because, basically, they are small, furry and run which means that I am universally declared to be a headache. But I suppose I ought to admit to their existence, because they were here long before me.

Back in the early days of Mum and Dad's relationship, when they still lived in the city, Mum insisted that they needed cats. Dad was dubious, having shared his student days with the sort who sleep all day and wake briefly to vomit or poo on your carpet. Mum, meanwhile, had grown up surrounded by cats, as her mum had run a cat boarding kennel and worked closely with animal welfare organisations. Mum won.

Rooster and Sol's mum lived round the corner and through her work as a vet nurse came across two kittens at the RSPCA shelter. They had been rescued by the RSPCA wardens from bad circumstances and were half wild. They also had cat flu, which had killed off their siblings, and were fading fast. So she brought them home to nurse them, and emailed Mum at work with this picture: 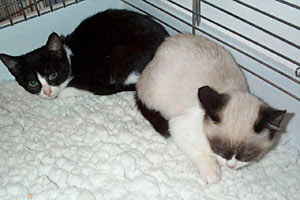 How could she resist?

Once J had nursed them back from the brink, they came to live in our family and all moved from the inner city to the country, with an acre of land to explore. Lucky cats, huh? Here they are on the regular morning walk round the garden, paddock and veg plots. 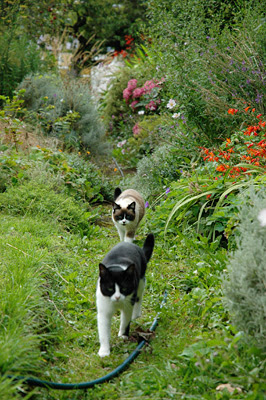 They are decidedly different in looks and character, despite being sisters. But they are both quite small, having had such a hard start to life. 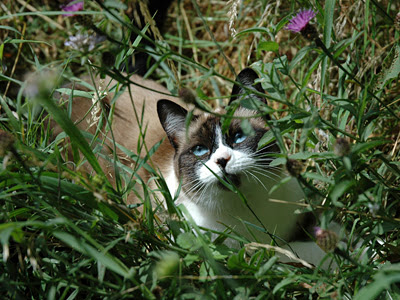 so named because her first response to trouble is to 'play possum', in other words, stay very, very still and hope it all goes away.

Possum is aware of her beauty but is in denial of her weight issues. She also is rather opinionated and thinks the sun shines out of her .. cough... 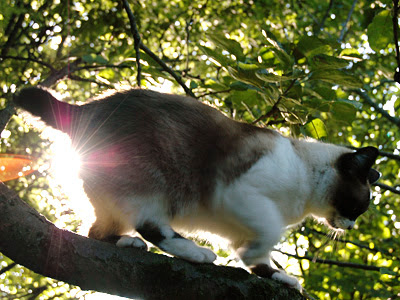 And this is Newt. 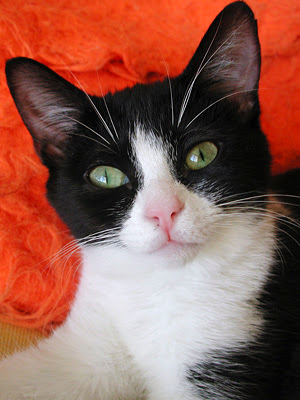 She is smart, small, wriggly and always Up To Something. She likes to supervise, hence her more common name Big Boots. Usually heard asking "What are you doing? What's that? Can I poke it?" Possum, meanwhile, just says "When is dinner?"

Newt is agile - Spiderman in cat form - and specialises in catching birds. 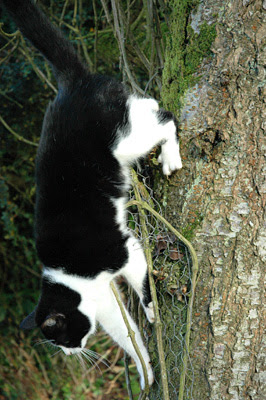 Possum is, erm, not so agile. But don't be fooled by the dumb blonde appearance - she is the scourge of rodents. Laziness becomes a virtue when hunting. Just sit very still for a very long time and use those radar ears.

They both own my Mum. They climb in bed while soaking wet in the middle of the night and warm their cold toes on her sleeping body. They hang out in her office so that her computer slowly chokes up with cat hair. They also march around in front of Dad when he's working at his computer. He's adapted well - he types between the cat's legs and cranes his neck around the cat's ears. 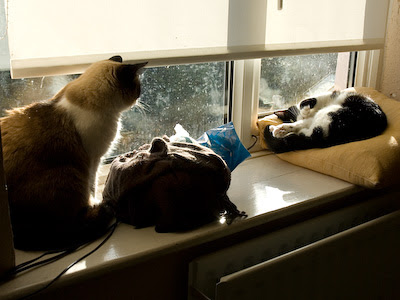 Both cats have made a good few claims on the pet insurance. Both have had toes amputated. The worst was last year when Newt had a terrible injury - burst bladder, bruised internal organs, wrecked hip joint - which the vet thought was a result of being kicked. By human or sheep, we'll never know. Usually cats with burst bladders die of secondary infections, but Newt is not your normal cat. Thanks to the amazing efforts of the vet and full-on nursing from Mum she pulled through. With perfect bladder function. One leg is slightly shorter because the top of the femur had to be sawn off, but she's as mobile and athletic as ever.

I have to admit that their rosy existence has been a bit curtailed since I arrived. They now have to be fed upstairs, protected behind a system of pet gates, and exit the house through an upstairs window onto the greenhouse roof. Possum has spent the last four months mostly asleep on Mum and Dad's bed, in the hope I'll go away. This was probably the last time I met her downstairs, and look how young I was. 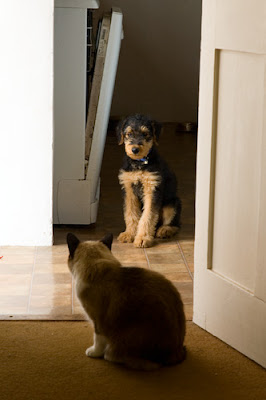 Newt has now started to claim back her territory, which is brave as I am so excited to see her I usually bounce up and down, bark and chase her. But little by little I'm learning a smidgen of self control, and we even get to touch noses occasionally.

Unless we're in the garden. Then she is really in trouble.

Mum hopes I'll eventually get a good thing going with them, but it is taking a long time. Did anyone else start off like this with their cats and end up friends with them?
Posted by Mojo, Digger and family at 14:23