Some angels are hairy. 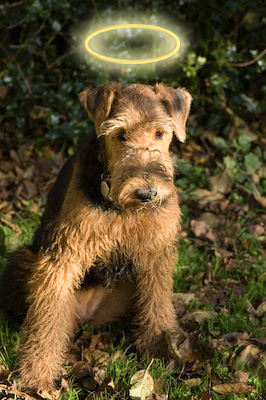 I guess you'll just have to take my word for it.


The last few days have been great. First up, Ferndoggle of Jackman Avenue nominated me for Post of the Month at Dogs With Blogs! It's a pretty amazing feeling when someone else finds the stuff you write fun. I mean, I enjoy myself hugely, but I don't expect others to! Aroooo! Big Aire-kisses to Ferndoggle! Actually, its great seeing who else is nominated - there's some hilarious takes on existence which you really ought to check out. I've voted for Stanley's post about Stella, because the pic of her in full-on hyper intense mode followed by the pic of Stan looking pained is the funniest thing I have seen in a long time.

Then, the lovely Molly and Taffy have honoured me with this award:

which is just so fantastic! They describe it as:

This award is presented to a successful blogger, one who can "be the blog" - making it their own, staying with it, interacting with the readers, and just plain having fun.

I've only been blogging for a few months, and sometimes I post too much and then I post too little, then I get behind with everyone else's blogs. But I love being part of this community and I'm so happy that Molly and Taffy enjoy my barkfests. So many thanks and hairy hugs to M & T!

I'm going to pass this award on to two others, because I love 'em both. First up are Noah and his sissies all the way over there in Australia. I feel like dropping in and hanging out with them every time I read their posts because they are such a cool bunch. Pity they live 10,000 miles away. Plus, there's that uncanny ability to photograph all four Dales sitting at the same time. I mean, getting one to sit is tough - but four? I keep going back to this post for another peek because it makes me laugh so much.

And the other dog I'd like to award is Sophie. Great photos, succinct writing style and bloomin' hilarious! She gets me snorting with laughter on a regular basis whilst veering from the sacred to the profane. That's Sophie!

Want to know what the best part of the last few days has been?

It was this morning, when I woke up and was let out of my crate to discover a huge dead mouse in the middle of the living room floor. I think one of the cats secretly loves me. Arf!
Posted by Mojo, Digger and family at 17:53