My parents keep saying that they wanted a dog to share their walks but so far, because I'm a young pup, they haven't really taken me on a big one. Last week, though, it was Dad's birthday and a glorious warm sunny day - quite exceptional for this time of year - so off we went.

We went to a village called Lustleigh Cleave on the edge of Dartmoor. It's a very chocolate-box village, and the walk is fantastic. It is five miles, just right for a pup like me, and goes through mossy woodland, over open moorland, and back through more forest. Most of the trip is ideal for me to be off lead.

Here's the start of the woods. It's like a fairy glade, all mossy boulders and dappled light. I went nuts and just ran up and down the hill. My mum was too puffed from going up hill to call me too much. 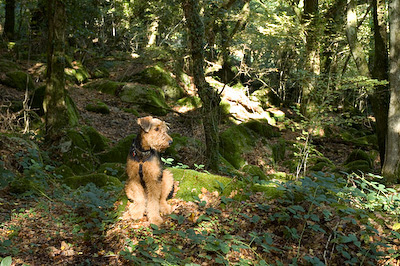 I was so thrilled to be there I ran ahead further than usual, but I kept coming back when called so that was ok. But when we got to the top, I disappeared for a while. And came back looking troubled. I even barked over my shoulder. So they put me on the lead and continued, and this is what we found: 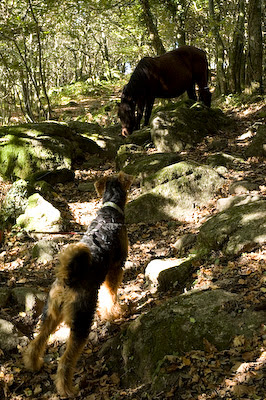 a wild pony! I was a bit freaked out by this and kept muttering, but we got past ok. Only to meet this young one blocking the path: 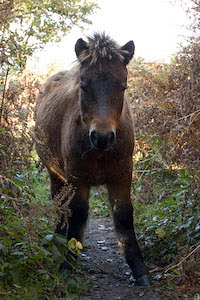 How cute is that hairdo?
Dartmoor ponies are quite small and tubby, and by the time we got past a whole herd of them I accepted that they were pretty chilled out. Dad was fretting that they would mug him for the apples in his bag.

Anyway, once past the ponies I was off again leading the way. I match the bracken, don't you think? Hurry up, you two. 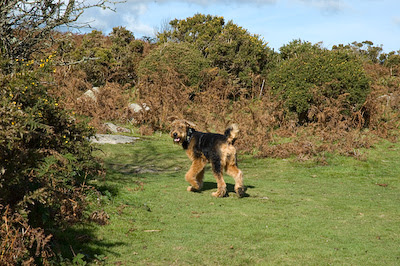 We spotted these, and think they are very poisonous. Mum was kneeling in pony poo while taking this shot. Silly mummy. 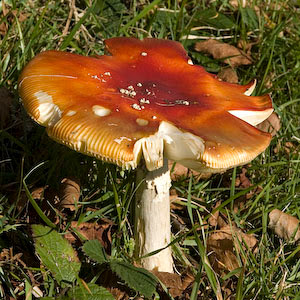 Back on the lead again. They just don't trust me with livestock. How cute are those calves? They are a breed called Belted Galloway. 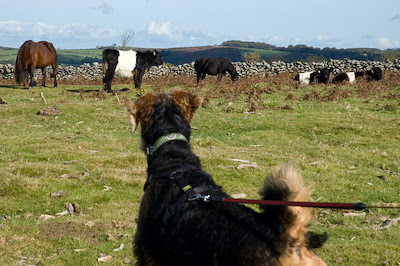 Taking a breather. the high moorland of Dartmoor is just visible in the distance. 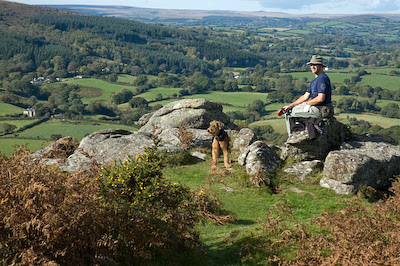 The return trip through a lovely forest. Mum wanted a photo of me enjoying myself but I just kept turning round and telling her to hurry up. I had no trouble following the path, even though at times it seemed very faint to the humans. 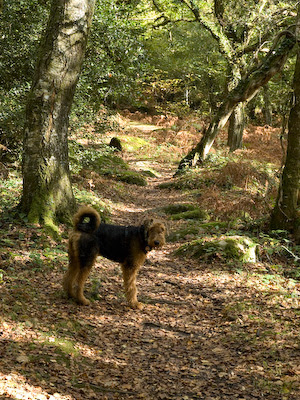 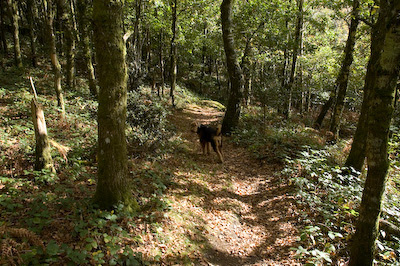 I've realised that I am beautifully camouflaged for autumn. Everywhere was strewn with birch leaves and they were almost as golden as me. 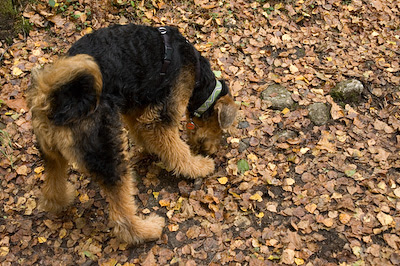 I have to admit I was tired after this walk. In fact, I was tired for a couple of days. Apparently if I had paced myself instead of running up and down the hill for the first mile I would have been much better. But I'm up for this walking malarky any time they offer it. yippeee!
Posted by Mojo, Digger and family at 10:52