I had a great walk on the weekend which I keep meaning to post about. But then another day is another walk, and I get distracted.

Yesterday Mum and I went to retrace a familiar route through the local footpaths, but things went a bit pear shaped. First she had to get me over the world's most difficult stile. Normally she has to haul herself up because the steps are way too high, but add to that 12 wriggling kilograms of Airedale pup in her arms and it is all rather tricky. Once over, though, we found our way blocked by this lot. 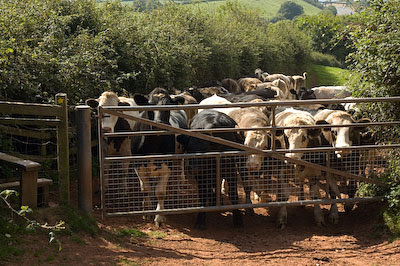 Much hollering, arm waving and barking wouldn't shift them, so we had to retrace our steps. We had to do about a kilometre up the lane to get to where we wanted to be.

Round here the lanes are very narrow, with hedgebanks on either side that are much higher than the cars. We met a white van twice which had about a foot clearance to squeeze past us. Mum squashed me against the bank with her legs and hoped I didn't panic. Actually I am rock solid on this - not fazed at all. Annoyed to have my ears stung by nettles, but not bothered by the van. 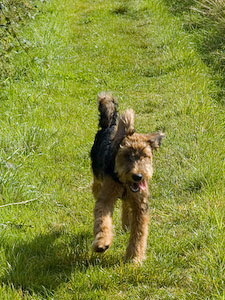 In the end we had a great walk. We practised my recall, which I obliged with at first. Then I did my special trick of running off in the opposite direction as soon as I hear the word 'come', laughing over my shoulder as I go.

This time, mum got her revenge. Leona, who runs my puppy class, suggested that Mum hides if I do a runner to stop me feeling so confident.

So evil Mum did just that.

I found her hiding in the grass and I was not pleased that she saw the concerned look on my face. Anyway, I got treats, so all is well. 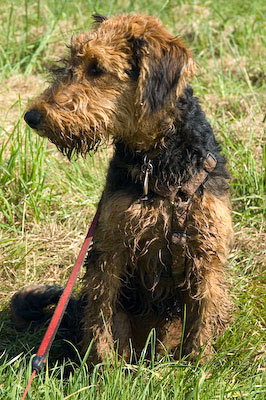 I also got my own back.

OK, she said, have a drink from that little stream.

OK, I said, ignoring the clean water and inching along to a deep puddle of slime. I lowered myself in with a look of pure joy. Nothing beats cool mud on my belly. It was the finest, smoothest, stinkiest mud I've ever found.


Best thing is that when she took this photo of me rolling the mud off on the grass, she hadn't yet realised that I was simultaneously rolling in something dead. In fact, I think it is actually hanging out of the corner of my mouth in this shot. 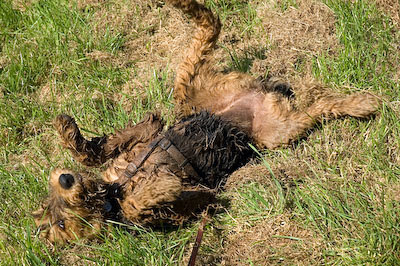