Digger is a funny boy - sometimes grumpy with dogs, often terrified of simple things like lamp posts. For a while we've been going to agility classes to build up his confidence, especially around excited barking collies. Slowly but surely he is getting to grips with it.
Yesterday we did a full steeplechase course for the first time at our club competition. And despite having never done more than 5 obstacles in a row, he did six rounds with about 20. And blow me down, managed to snag a couple of rosettes! 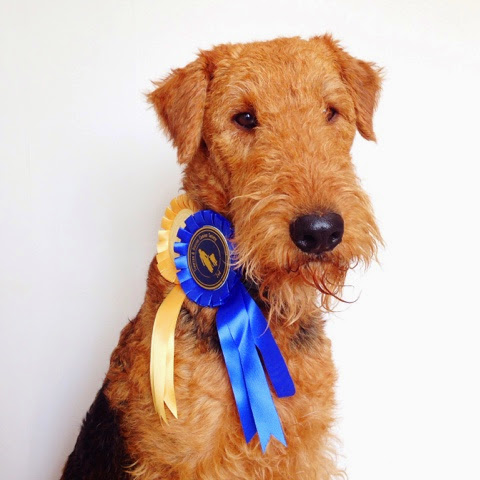 And now he's all big-headed.
The truth is that in each round he kept wandering off to see people. Nosepoked the man with the stopwatch. Nosepoked daddy. Had a quick wrassle with Mojo and brought the perimeter fence down. But each time he came back and did the jump so nearly went clear. It was a slow-motion comedy.
I'm so proud of my boy.
Posted by Mojo, Digger and family at 15:21 2 comments:

The boys are concentrating very hard. Wimbledon is on the tv and the laptop is streaming live World Cup football. 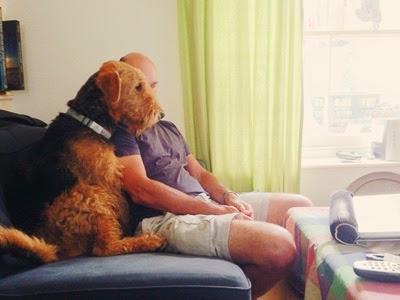 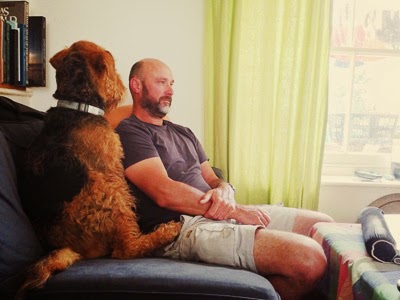 This is the view from my pillow this morning, my big-nose girly stealing my bed space and oxygen. 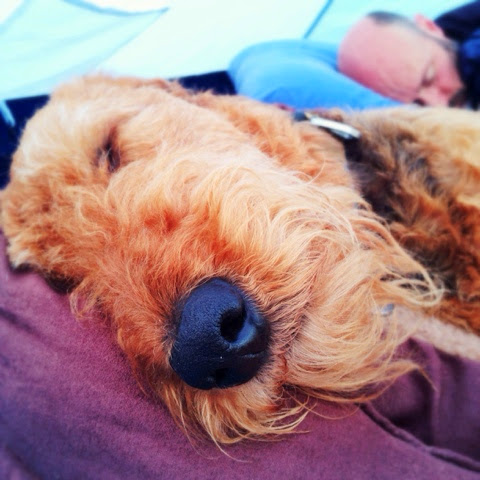 We thought we'd start with a one-night camping trip to remind them how it works. Shouldn't have worried. They were fabulous (apart from when we passed some cats in a fishing village, but the less said about that the better).
Hooray for summer!
Posted by Mojo, Digger and family at 17:28 2 comments:

Every night, around tea time, the Dales remind us why we no longer have a nice garden.


If it won't bounce back from the horizontal, it's done for.

What's that Mojo? The blog is what? Oh, yes, gathering cobwebs. 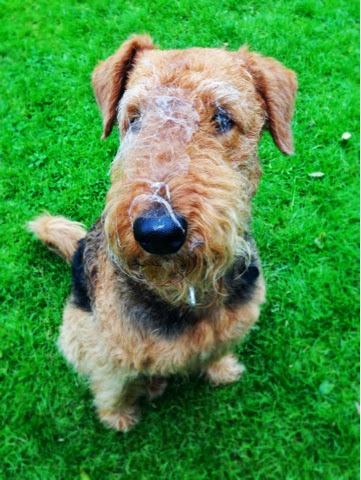 I see what you mean.
OK, but if we're going to blog, you're going to have to go public with your naughtiness. Yes, I will tell everyone how you ran off yesterday when Dad took you for a walk. How he watched your little fuzzy derrière disappear across the fields along to the next farm. How he had to go home with Digger, pump up the bike tyres and come out searching. How the two gents already searching for your best friend Eireann the red setter joined the hunt. How he gave up, cycled a mile home to spot you prowling up the lane.
Let's go back a day.
Here's Remus. Aka "The Darkness". He's huge. He's got hip dysplasia. He's also the most incredibly successful hunter. 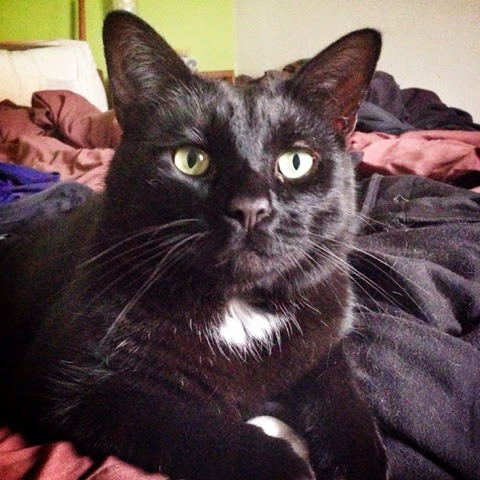 Anyway, Mum is weeding the veg plot and Remus lazily chases a bunny out if the grass. It does a quick left turn and bolts to the gate, where two incredulous Airedales stood with their mouths open. You've waited 8 years to catch one, haven't you, Mojo? You didn't have to squeeze it so hard did you? Dad swung into action and rescued it, only to have one of the chickens rush over and try to peck its eye. It's a horror movie.
Anyway, since then you've been on a prey drive high and all you want to do is look for bunnies, even if that means running off.
Here's the problem though. A few hours after you were reunited with Dad down the lane, our neighbour found that same pecking chicken deceased in their driveway. Just down that lane. Was it you?
Digger would like to point out that he is never ever naughty. 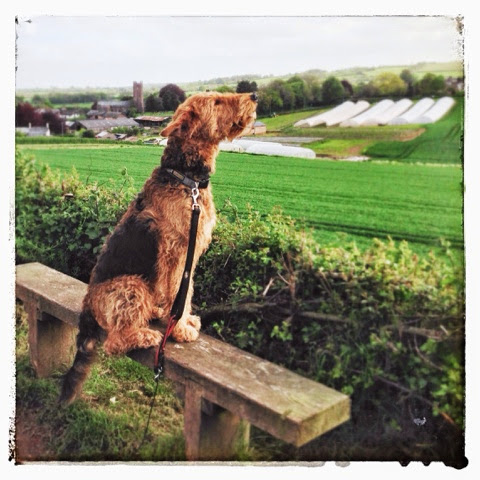 (And if you believe that, you believe anything - Mum)
Posted by Mojo, Digger and family at 10:24 1 comment: 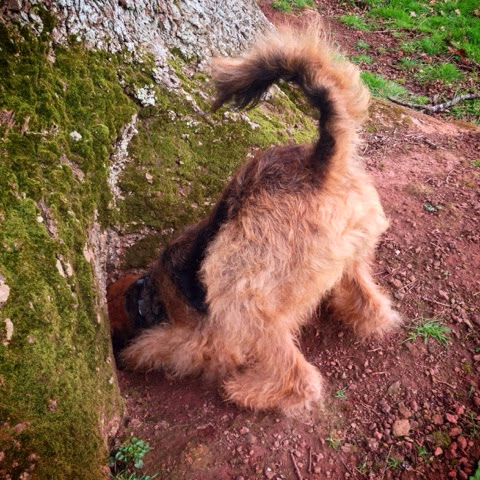 ....and we completely forget to blog. Oops.

So what's it like to share a tent with two bears?  Well, cooking dinner went without a hitch while the sun set and a heavy dewfall misted across the field. 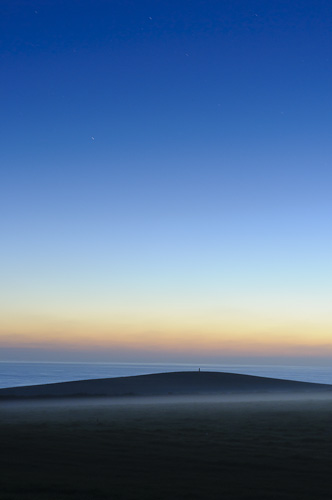 They were both so tired from the day's fun they really just wanted to crash. But of course, Mojo can't just settle down - she has to do a few loops of the tent between the inner and the outer, then escape under a flap and set off to check the food status of our tent neighbours. Digger was fabulous. Sleep here, mummy? OK.
Granted, they both felt obliged to stand on Dad at 3am and polish his face a bit.

Morning was so chilly the poor bears were shivering. Mojo had her coat stripped the week before so was especially miserable. So what can you do? Make towel togas, of course. Or Dogas, as we now call them. They really didn't understand why their mummy was laughing so hard. 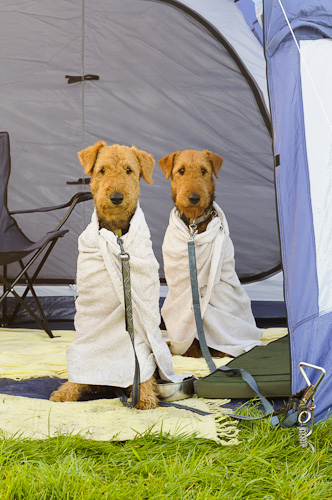 A nice early start for another walk. Not so sunny at first. 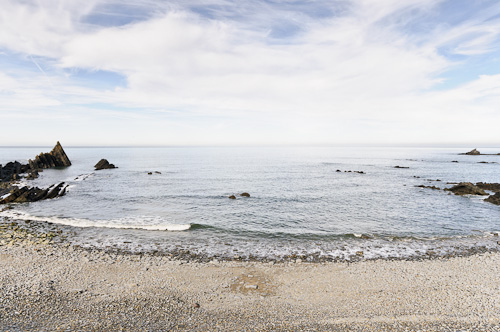 This photo makes the cliffs look small but they are huge - check the size of the waves. 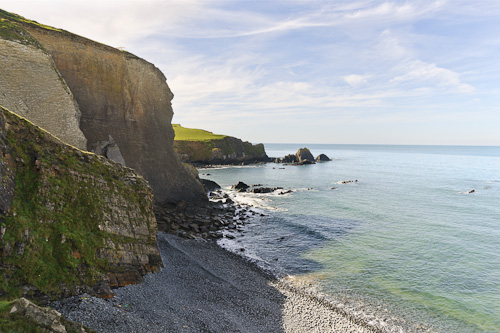 We had elevenses on the beach  between two little waterfalls and the bears ran amok looking for things. I'm amazed how fast they move on these stones - it's really hard work for a human but they have four wheel drive and run full tilt over them. We did a lot of grimacing and telling Mojo to mind her arthritic hips. 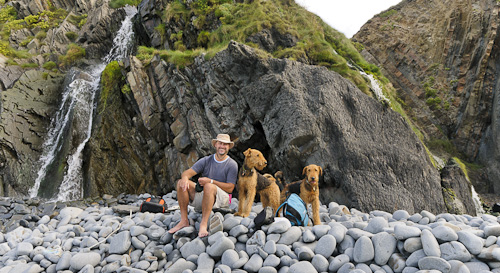 Then we went back to another beach where a stream made a paddling pool on its way to the sea. While we waited for some small children to get out of our pool we played on the rocks. Mojo set off first: 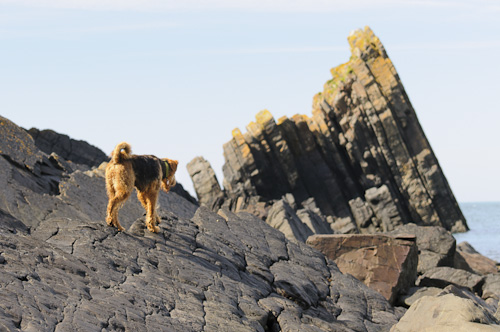 The boys followed, but then Digger lost his nerve and stood there looking droopy and miserable as usual. 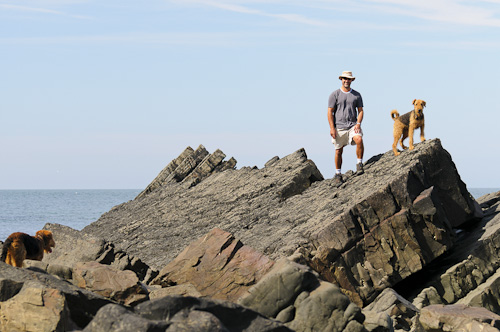 Mojo waited and mocked him gently. 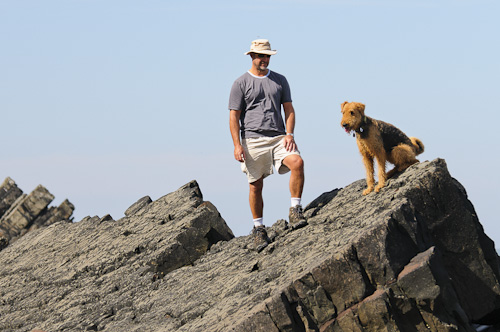 Until he came and sat  in the same spot while managing to look droopy and miserable. He's a funny chap, so different to Mojo. She's so bold and full of ideas, and he's so unsure and full of worries. Then again, he's so good at cuddles and Mojo breaks your heart by saying eeewwww to public displays of affection. 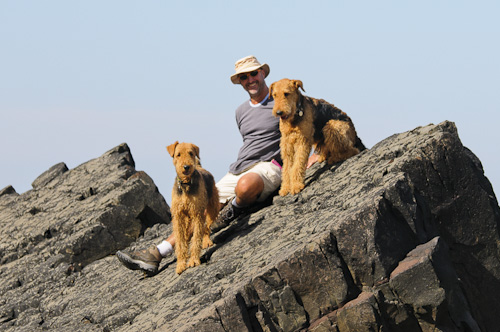 Once the kids (and their icecream and toys) left the paddling pool we sent the bears in. No photos of swimmy action as we were too busy throwing sticks and trying unsuccessfully to get Digger to get more than his toes wet. But here's a view upstream to the most delightful old cottage. 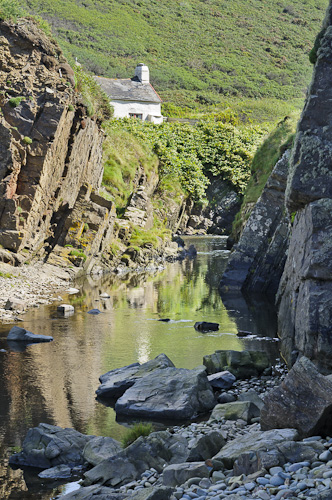 Wish you could all come to Devon and play! 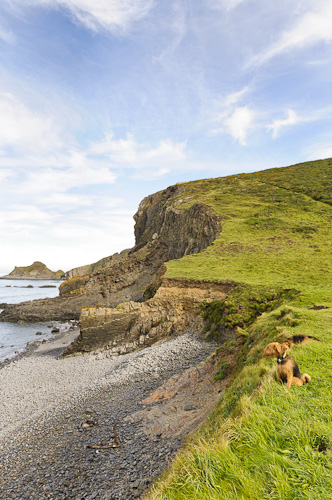