I miss my mum. She's gone away for five whole weeks and I really, really miss her. It's only been a couple of days. She won't be back for ages!
The house just seems so quiet without her. I'm doing a lot of barking at the moment, just to fill the silence. Dad joins in too, although sometimes it sounds like he's shouting at me. That can't be the case, though. I mean, why would he?

Dad's been trying to make it up to me. He's been giving me extra walks 'cos he thinks I'll be easier to deal with. Ha! We'll see who wins that particular battle, won't we. I got him good and proper yesterday. He took me for a run in the morning, then put me in a crate and went to play tennis - for TWO WHOLE HOURS. So, he was running around while I was resting. When he got back, all tired and everything, did I give him hell?

What do you think?

He had to play in the garden, then down the field with the tennis balls, and then had to take me on a big walk. He was exhausted by the end of the day, but I was still up for more mischief. Last time he tries that, I reckon.

So, anyway, Dad's typing for me while mum's away, so if I sound a bit different don't worry. I've not got a cold or anything. It's just Dad. It's the way he types.

He's obviously feeling guilty about Mum going away as he's been trying to make it up to me. He took me shopping the other day and we got a new toy. 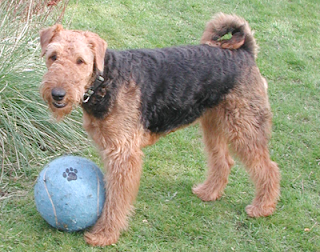 I love it because it's really light and bouncy and dad kicks it up in the air. It's good to chase but never goes too far.