There's a great British phrase - things going pear-shaped. It's when everything just goes a bit awry. And that's been the story of the last few weeks. So the Olympic tribute went out the window.

Once the extra menagerie went home and we didn't have to keep the doors shut and half the house barricaded (dog in season), we thought we'd relax. But then my computer started having fits and I spent forever sorting out the problem. Good job too, as I've been asked to do a bit of post-production on some photos for a charity calendar. The photos are of people who work in a beautiful National Trust garden near here, and in keeping in the spirit of charity calendars they are all naked save for a strategically placed plant or watering can. Ha! I'd love to show you but I think that might be a bit too much!

Anyway, the real pear-shaped moment is Digger, who is not well at all. He's been a bit peaky for a few days and has vomited a few times; not unusual for a dog who likes to eat everything. But last night he was sick everywhere, and today he's carried on the same. He's so miserable. The vets can't feel a blockage and his temperature and heart rate seemed ok so he had an anti-vomit injection and we see how he goes. But he's not a happy chap. Completely off his food, and feeling lousy. If he's the same tomorrow we'll be back to the vets. Even if they x-ray him they may not be able to see soft blockages, and which bit to open up? I must admit we're feeling really tense and worried right now. So any Aire-zen would be appreciated.

Here's a pic of the little chap exactly a year ago, when he decided to check on my painting with a nose-poke or two. 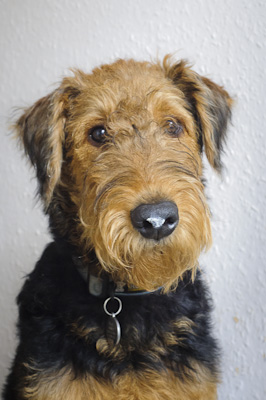