Dad is still going on about his iPod.

I know I was wrong to munch it. I know it was expensive. But hey!!! Get over it already! I've tried to point out that it was his fault for leaving it within reach, but that went down like a lead balloon.

It's not that he's being horrible to me or anything - he's the same pushover for a goofy face as he ever was. It's just that he manages to mention it in so many conversations and I'm sick of feeling guilty. And I'm also worried that he's going to let Santa know, which would be a tragedy.

So anyway, I'm practising my guilty face. Do you think this will work? 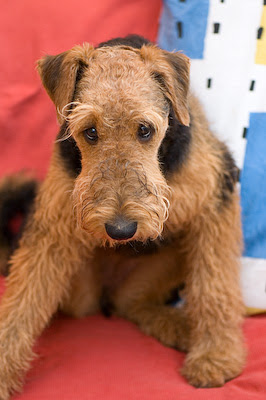 There's a perception that I'm the naughty one in this house. But this morning something happened that can't be blamed on me. Mum was gathering up her clothes to put in the wash, and reached under the chair in the bedroom to pick up what she thought was one of her brown hiking socks. It was a dead rat.

Despite both cats, Newt and Possum, being curled up tightly in a deep snoring sleep there's no doubt it was one of them. The bedroom is a cat safety zone protected by a dog gate. So no-one can blame me.
Posted by Mojo, Digger and family at 11:15